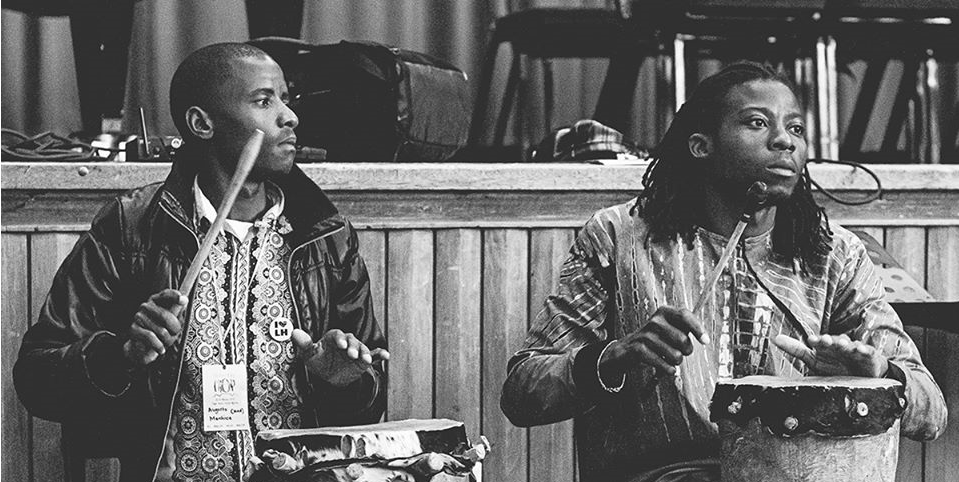 Ernesto Chongo (Nyttu) was born in Maputo, Mozambique but grew up raising livestock in the rural province of Gaza. As a young boy he played a variety of traditional Mozambican instruments for his own enjoyment while in the fields with his cattle and goats, and soon realized that he had to heed the call of his ancestors and pursue music directly. The civil war that decimated the country during his formative years and his family’s disapproval of his pursuit of the arts were barriers to his artistic development but also became his inspiration. Even after being forced to leave his rural community during the war, he continued to develop techniques in building, repairing, and playing instruments such as Xipendani, Xitende, Xizambe, Mbira Dzava Dzira, Dju Dju, Timbila, Bombo, Ligoma, Hudo, Xocalhos, Djembe, and Pwangue.

A lover of Mozambican traditional music of all kinds, Nyttu seeks to honor the rhythms and melodies that he grew up hearing in the fields and around the campfire. Focusing on the Mbira (thumb piano), Chopi Timbila (a traditional xylophone that was placed on the Representative List of the Intangible Cultural Heritage of Humanity in 2005), and the Rwandan Inanga (traditional harp), he connects past and present to place and time using his life experiences and the Changana language as his guides.

Nyttu Chongo is a Global Music Initiative Artist in Residence Fellow at MacPhail Center for Music, 2022. He is also featured as a Cedar Commissions Fellow for the 2021-22 season, for which he is creating a series of new original works.

Nyttu Chongo was a 2020 Minnesota State Arts Board Artist Initiative grantee. The Artist Initiative grant program is designed to support and assist professional Minnesota artists at various stages in their careers by encouraging artistic development, nurturing artistic creativity, and recognizing the contributions of individual artists to the creative environment of the state of Minnesota. Grants are awarded for projects that will enhance or expand artistic skills or process, and advance an artist’s career by helping them generate greater visibility with and exposure to potential audiences. With this grant, Nyttu Chongo will produce his first album titled Libandzuwa: The Power of the Sun. Read more here: http://www.arts.state.mn.us/grants/2020/2020-awarded-ai.htm

Nyttu Chongo was nominated and accepted into the Recording Academy’s 2022 Bold New Generation of voting members. Convert your PDF to digital flipbook ↗